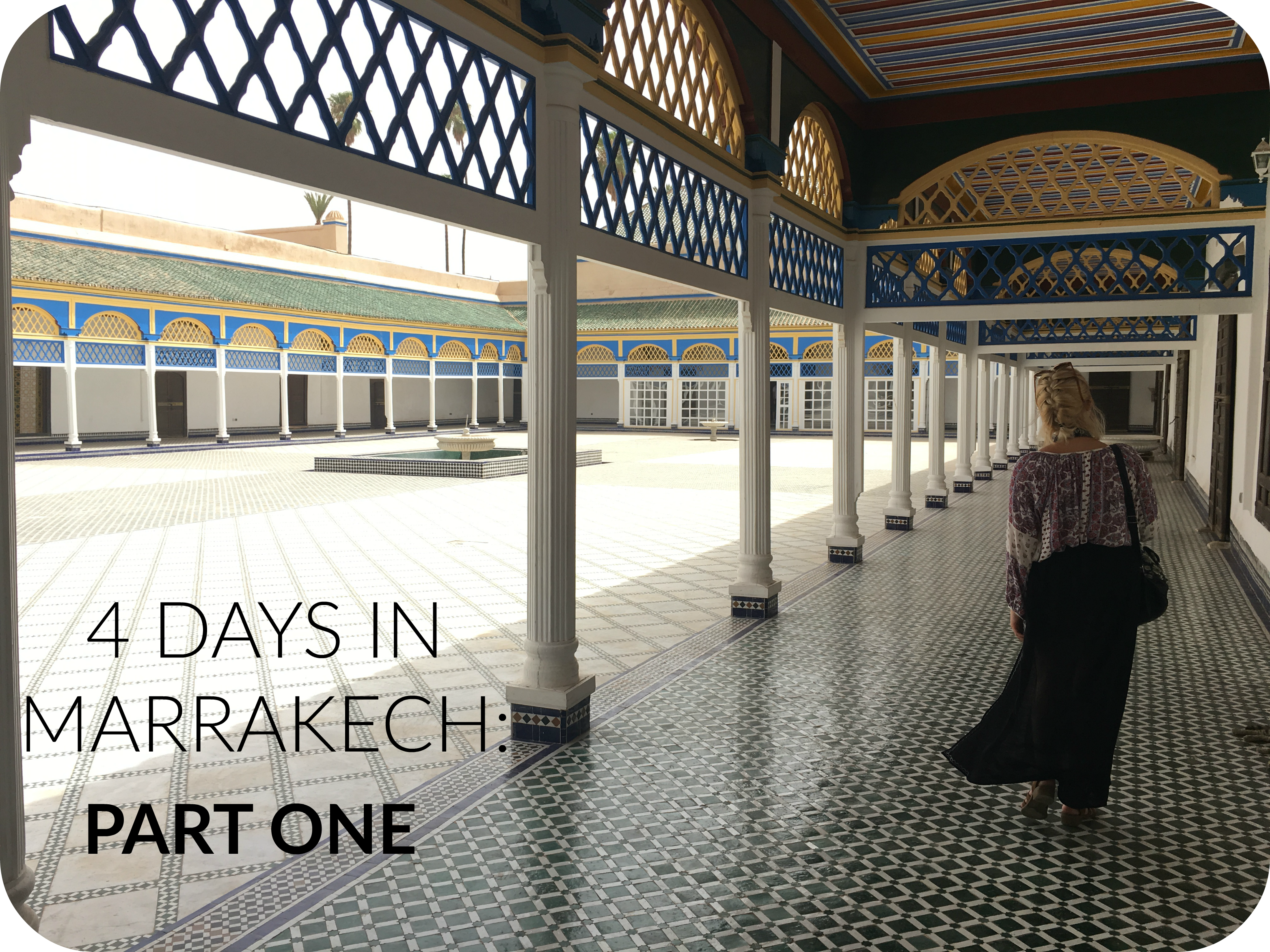 In July, I visited Marrakech, Morocco, or as our taxi driver called it ‘the crazy city’. I think crazy is an apt way to describe this bustling town, it really is out of this world. From the donkeys pulling carts through the narrow streets, to snake charmers in the main square, it is a whole different world. We stayed in a hostel about a 5 minute walk away from Djemaa el Fna, called the Rainbow Hostel. We were greeted from the taxi by one of our hosts, and throughout our trip they really couldn’t have done enough to make sure we felt welcome and informed, forever offering mint tea when we got back from a busy day exploring!

On our first day, we had an early flight from London and so we had had little sleep, so we decided to take it easy and go for some mint tea. We went to the Henna Art Cafe, as we thought we might as well get some henna done whilst we were there. Both women were ext

remely talented at their craft and our henna was beautiful. If getting henna done in Marrakech I would recommend going to a place like the henna art cafe as it is guaranteed to be brown henna, rather than the black henna that many of the women who do it on the street use, which some people can have extreme allergic reactions too.

I paid 75 Dirham for mine (far right) and they ranged from 50 – 300 dirham depending on how big
and intricate a design you chose.

After, we thought we could have a wander over to Ben Youssef Madrasa, an old Islamic college. This was harder to find than we thought, or maybe the heat and our fatigue made it more confusing, and we got lost in the souks and somehow made our way to the tanneries. When we eventually found it, we paid 20 dirham to get in and have a look around. The mosaics were stunning and it was very interesting to look around.

Unfortunately, that evening I had heat exhaustion, and was ill, so we went to sleep early ready to explore more then next day.

On our second day in Marrakech, after having recovered from the heat, we went out early to go to the Bahia Palace, which cost 10 Dirham to get into. The palace was quite large and very beautiful. I liked the fact that each courtyard seemed to have a different colour scheme and feel to it.

After, we walked to the Saadian Tombs, which again cost 10 dirham. From the palace, it was only about a 10/15 minute walk to get there, and we walked through a little market to get there, and past the Jewish sector of Marrakech. The tombs were much smaller than I thought they were going to be and it didn’t tae very long at all to look around them. There also wasn’t any information about what you were looking at so although the tombs were interesting to see, it was hard to attach much significance to them without prior knowledge.

For dinner, we went to a restaurant that overlooked Djemaa el Fna so that we could watch the goings on whilst eating. As we were in morocco, we decided to try a tagine, mine vegetable. It was delicious.

See ‘4 days in Marrakech: Part 2’ for the second part of my stay in Morocco!