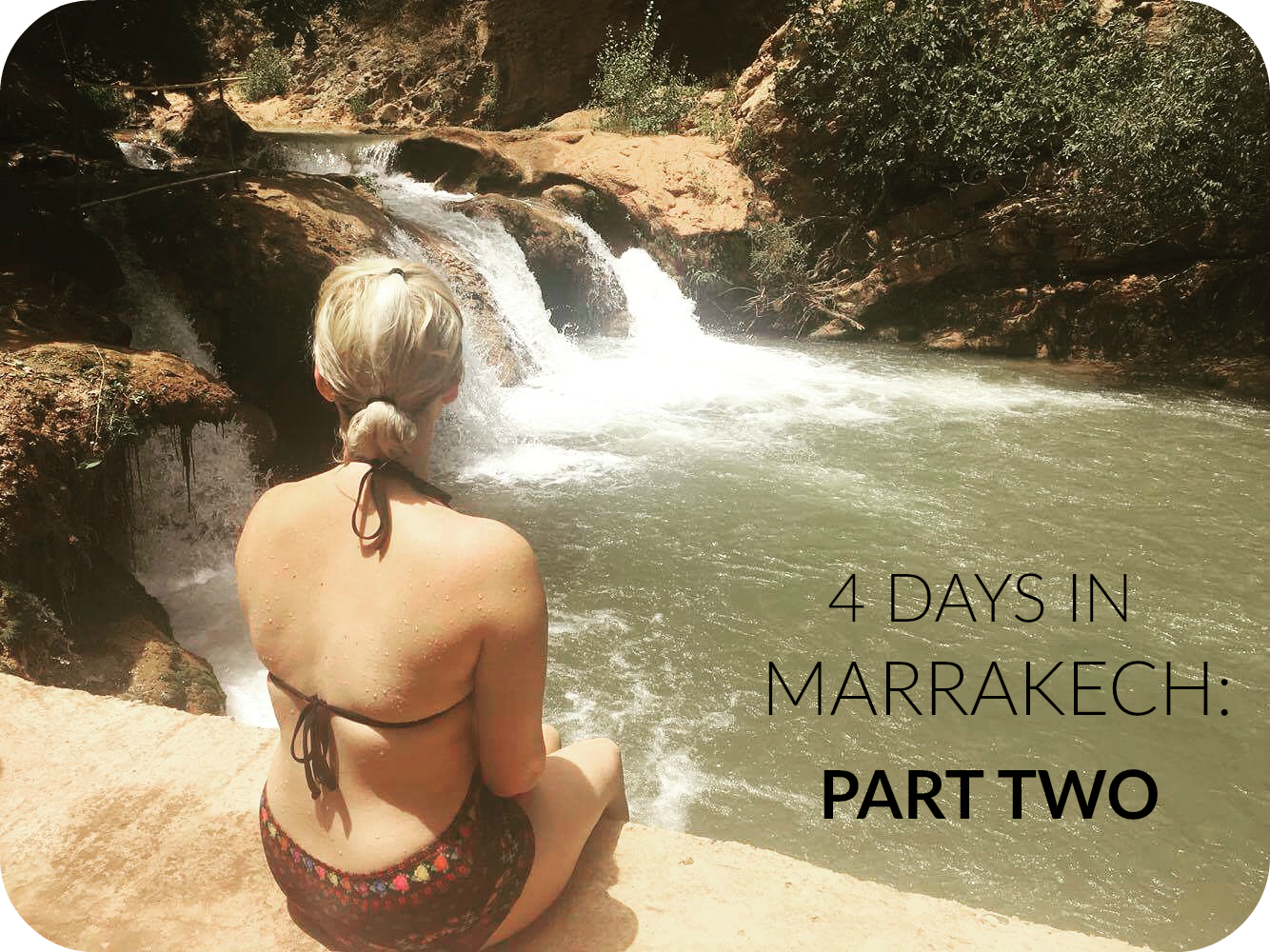 On our third day in Morocco, we went on a day trip to the Ouzoud Waterfalls, the second largest waterfall in Africa. We were picked up from out Djemaa El Fna, and taken in a minibus to Ouzoud, which took around 1 3/4 hours. Once we reached the waterfall, we were taken by a guide on a 20 minute walk to some natural pools that we were able to swim in, Apparently, a couple of decades ago, this area surrounding these pools used to be a hot spot for hippies, and some of the evidence of this can still be seen, such as the Rastafarian colours painted in various areas.

After swimming for a while, we then followed our guide to the waterfall, where we took a little boat to very near the cascades of the fall, before stopping for lunch.

After eating, we decided to go for a drink in one of the only places that serve alcohol in old Marrakech. The cocktails here were quite expensive, but this was to be expected as there is little need for alcohol as the majority of people living in Marrakech don’t drink.

On our final day, we went out to visit the Jardin Majorelle, the world famous gardens designed by Yves Saint Laurent. It cost 65 dirham to get into, which I thought was quite expensive, especially when we discovered how small the gardens were. I expected them to be quite large, but it only took us about 20 minutes if that to walk around the gardens. The colours, however, were exquisite and I did enjoy looking around.

On our way back to the hostel, we walked past the Koutoubia Mosque, which you can see the top of from Djemaa El Fna. Although in Marrakech, you are not allowed to enter mosques unless you are religious, it is still an impressive structure from the outside.

In the afternoon, we decided to brave the souks again, and spent an hour or two looking through the little boutiques, I bought a cushion cover that I liked and managed to get a price that I was happy with, despite the fact that I am rubbish at haggling!

On our final night in Marrakech, after eating dinner (tagine, again), we decided to try one of the street foods that were being offered –  Escargots. Snails have never really interested me in the slightest, but as we were there we thought it would be rude not to. I have to say, they were not appetizing in the slightest and I wouldn’t have them again, but I can at least say i’ve tried them now!

Overall, I thoroughly enjoyed my time in Marakech, and would like to go back when it wasn’t so suffocatingly hot! After spending four days there, I agree with our taxi driver, it definitely is a ‘crazy city’.