If you’ve ever heard of Koh Rong, you will have been amazed with stories of stunning beaches and a lazy way of living. Well, that’s exactly what you’re going to get! I visited Koh Rong near the end of my two month trip and it was so nice to just be able to relax on the beach with a nice cold beer. I actually don’t think I’ve been anywhere that was so pretty and peaceful. The white sand beaches were amazing and the sea was so warm and calm.

The island is situated about an hours boat ride from the lively beach resort of Sihanoukville. As well as being stunningly beautiful and the perfect place to relax, Koh Rong is also known for its partying!! For this reason, the neighbouring island of Koh Rong Samloem is located very nearby and is more accommodating to families.

But, there is a flipside. Because Koh Rong is an island, the facilities there are basic. Don’t expect air conditioning and there is a general consensus to not have long showers as it uses up the island limited clean water supply. There are also lots of sand flies so bring lots of bug spray! Apparently, lathering yourself in coconut oil is the best way to ward the beasts off but I just used my jungle fever and came out relatively unscathed.

What’s more, I also got sick on Koh Rong. Apparently, this is not uncommon from reading other people’s posts. As I said, the facilities are basic which I guess includes sanitary conditions. Despite this though, I  had a good time and the only thing I regret is not having stayed for longer! Because I was ill I couldn’t do all of the things that I wanted to which was a bit annoying, but it just meant that I had to spend more time in my hammock on the beach. It’s a hard life, I know. 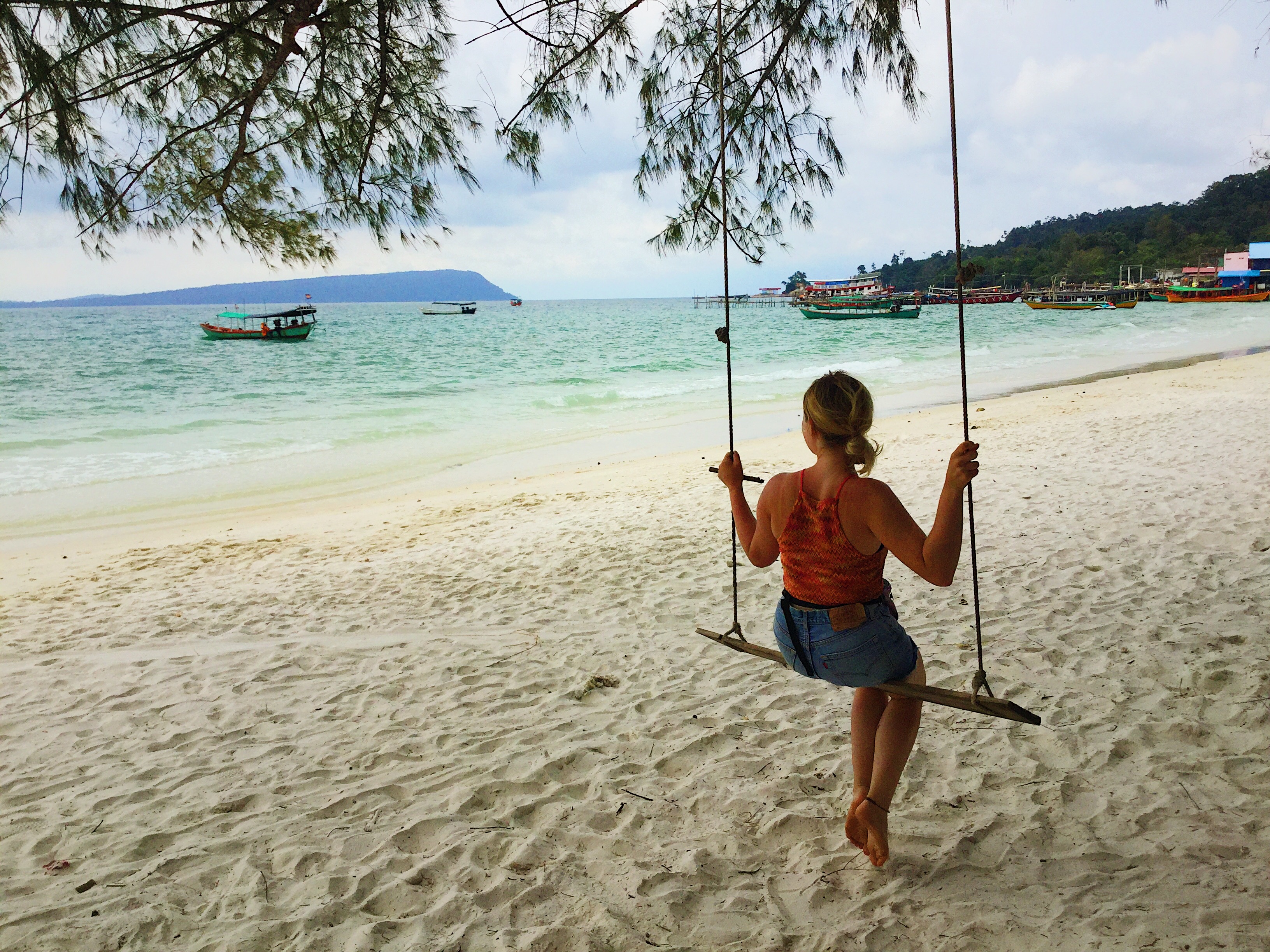 We stayed in the Dragon Den Inn Hostel and paid £11.50 for a double room for one night through Agoda. As I mentioned previously, the facilities are basic but our room was big and clean, we each had our own bed so that lack of air conditioning meant that we just had to spread out. We had an en-suite with a shower and toilet and had free towels which we could use in the room as well.

The hostel also had kittens which were absolutely adorable! But anyway. It’s in a great location as its a couple minutes walk away from the pier and is on the lively Koh Toch beach so perfect for going out for dinner and drinks!

Most people come to Koh Rong to experience the amazing beaches and just have a little break from the hustle and bustle of the city. And this is exactly what we did. We spent our first day on Koh Toch beach and on the second day ventured a little further round to 4km beach which was a 20 minute walk away just following the coastline. 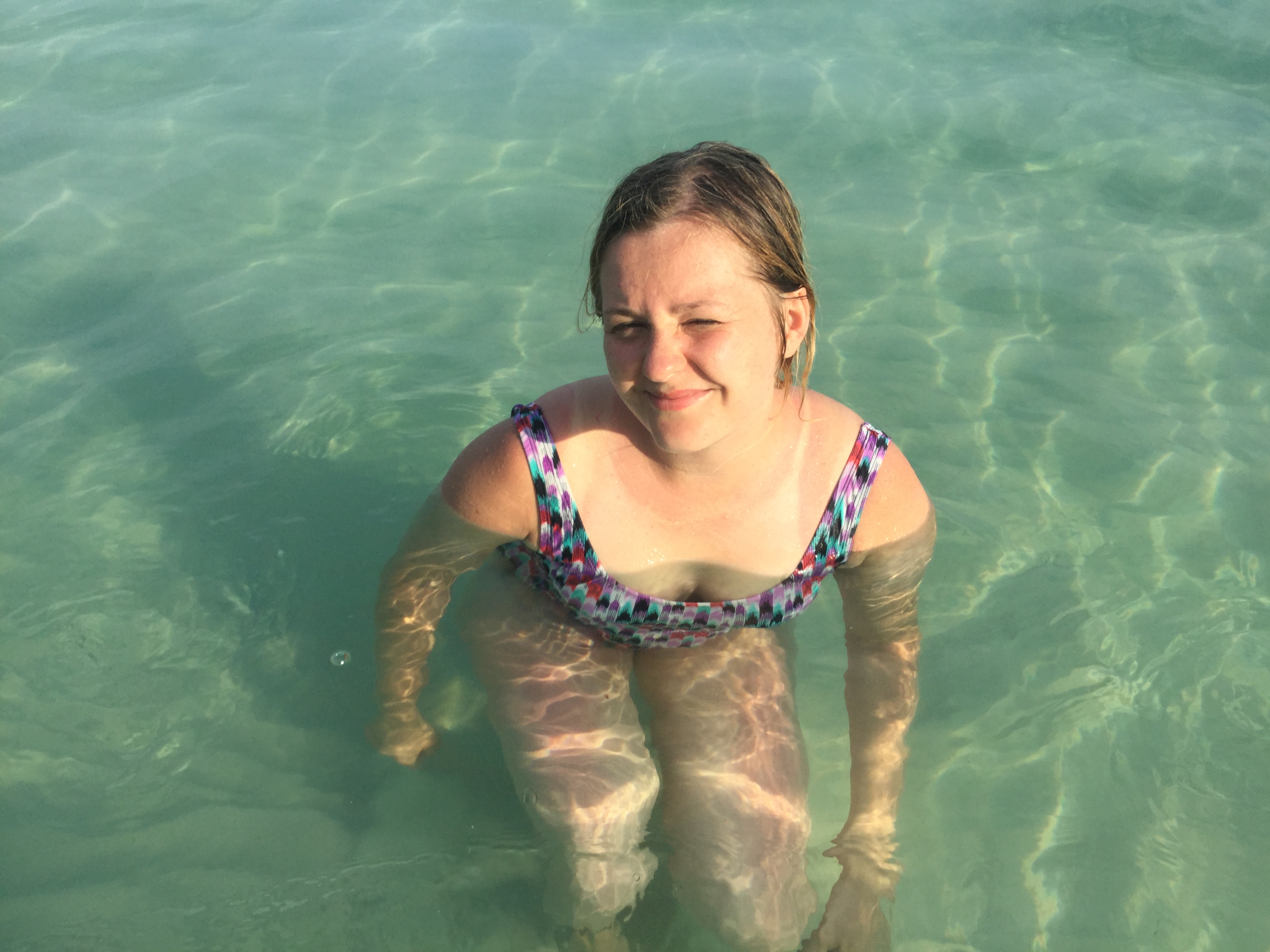 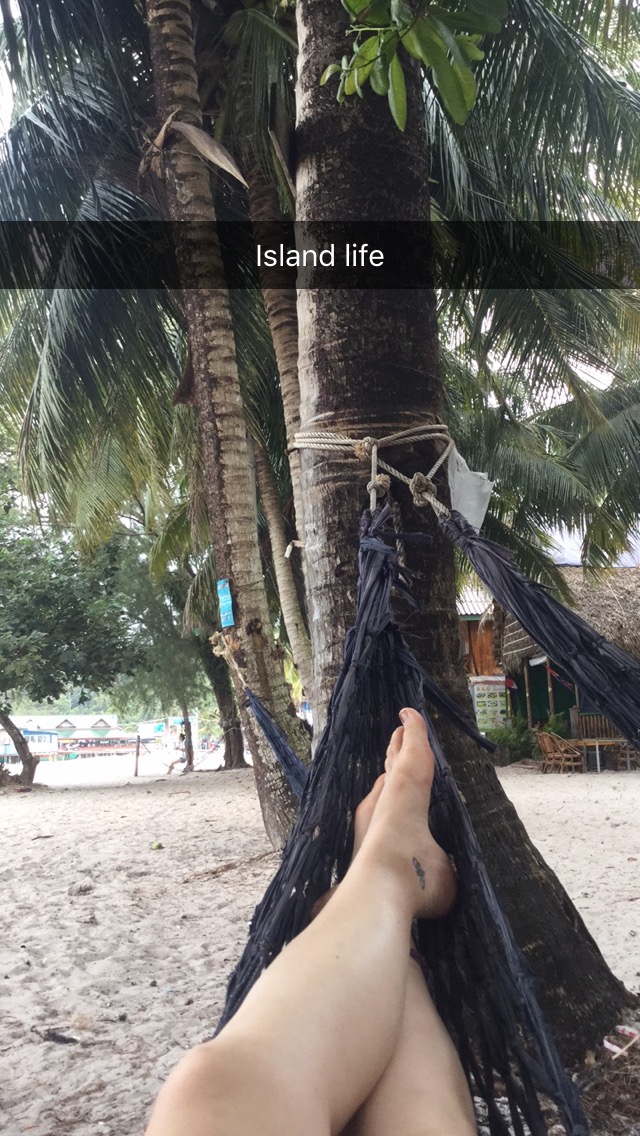 The weather wasn’t so great on our second day though and we did experience a tropical storm including two tornadoes. We had only been on 4km beach for maybe half an hour and had been for a dip in the sea but I did notice that that sky was clouding over a bit and the sea becoming a little more rough. I decided to go back on my sun bed and noticed that the clouds were coming in low and visbility across the ocean was getting poor. Long story short, we saw a tornado form and then touch down in the sea. We could actually see the spray from where it made contact. Then, another came down. At this point I was getting a little scared. There was nowhere to run to safety on the island if anything did happen to come our way. But thankfully, it didn’t. And it all just added to our Koh Rong experience! 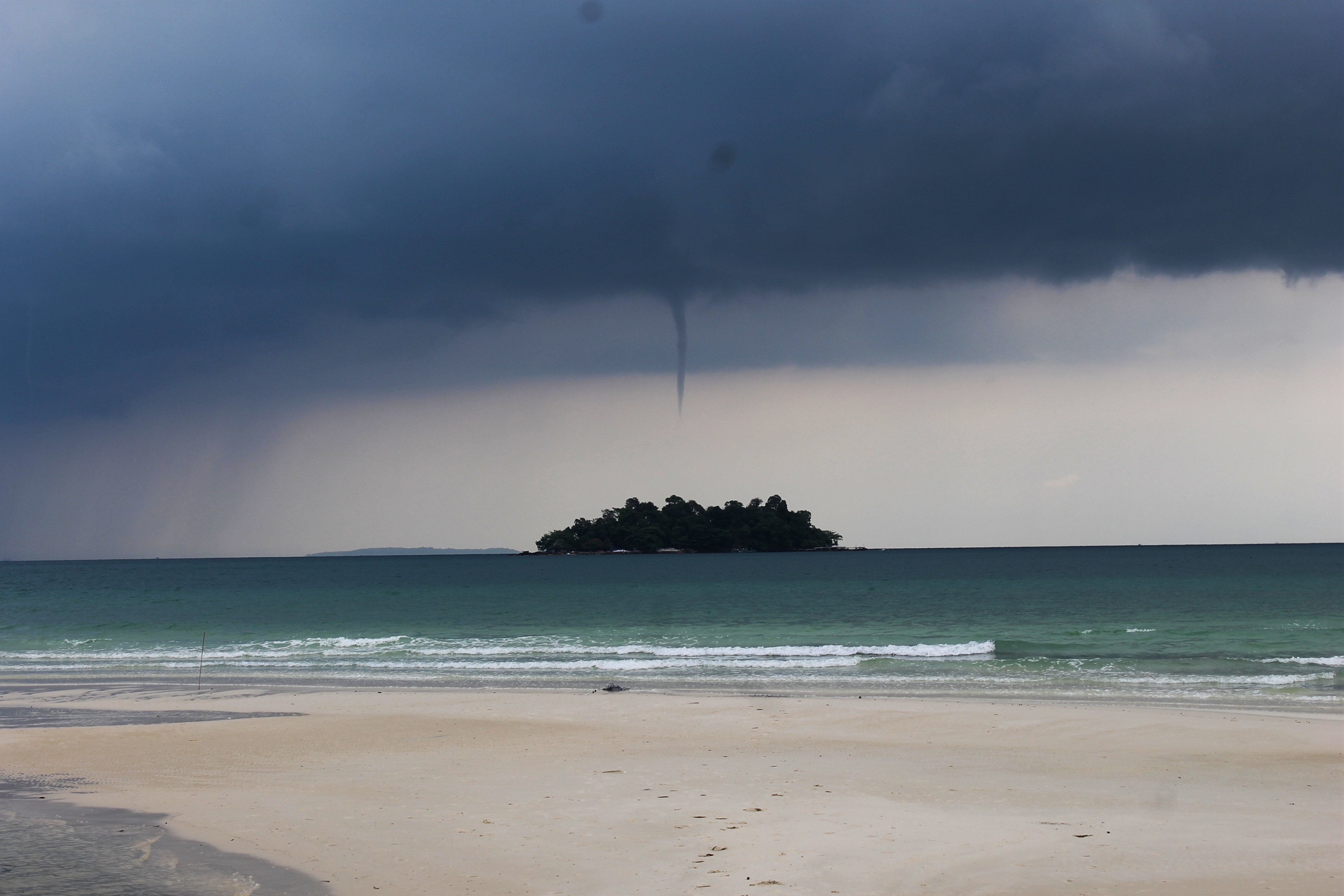 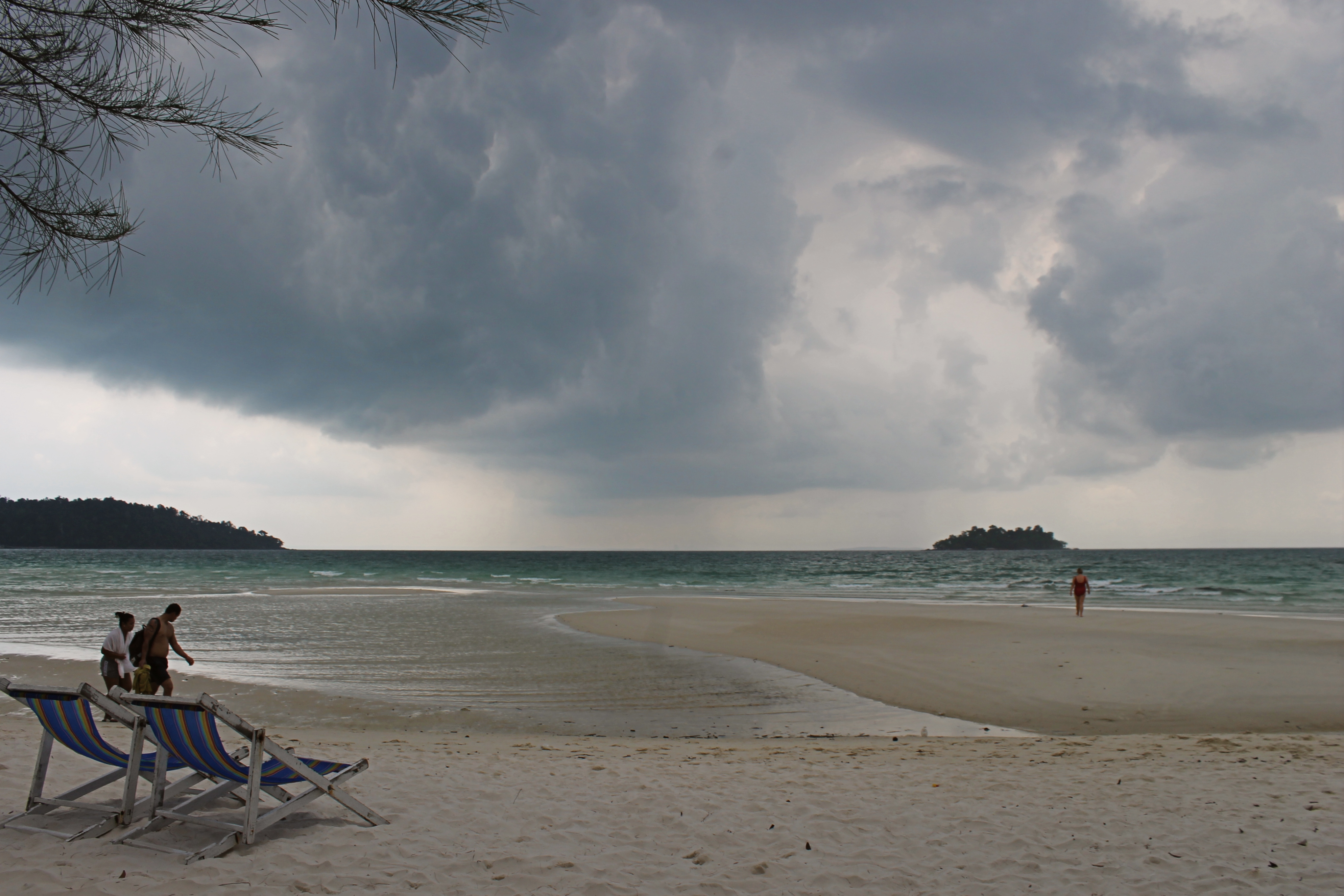 Koh Rong is known for its beach parties, and with the abundance of bars and young people, you can see why. On our only night on the island, as already mentioned I was pretty ill. So, although we did go out for some food and I managed to have a couple of cocktails, I just wasn’t feeling well enough to go the infamous parties on Police Beach. This is something that I was most gutted about. I was so excited to experience it but I guess i’ll just have to go back another time…

For those of you that don’t know, the parties on Police beach happen twice a week and carry on until the sun comes up, hosting a variety of great DJs. So, if you’re around and aren’t ill, definitely go visit! 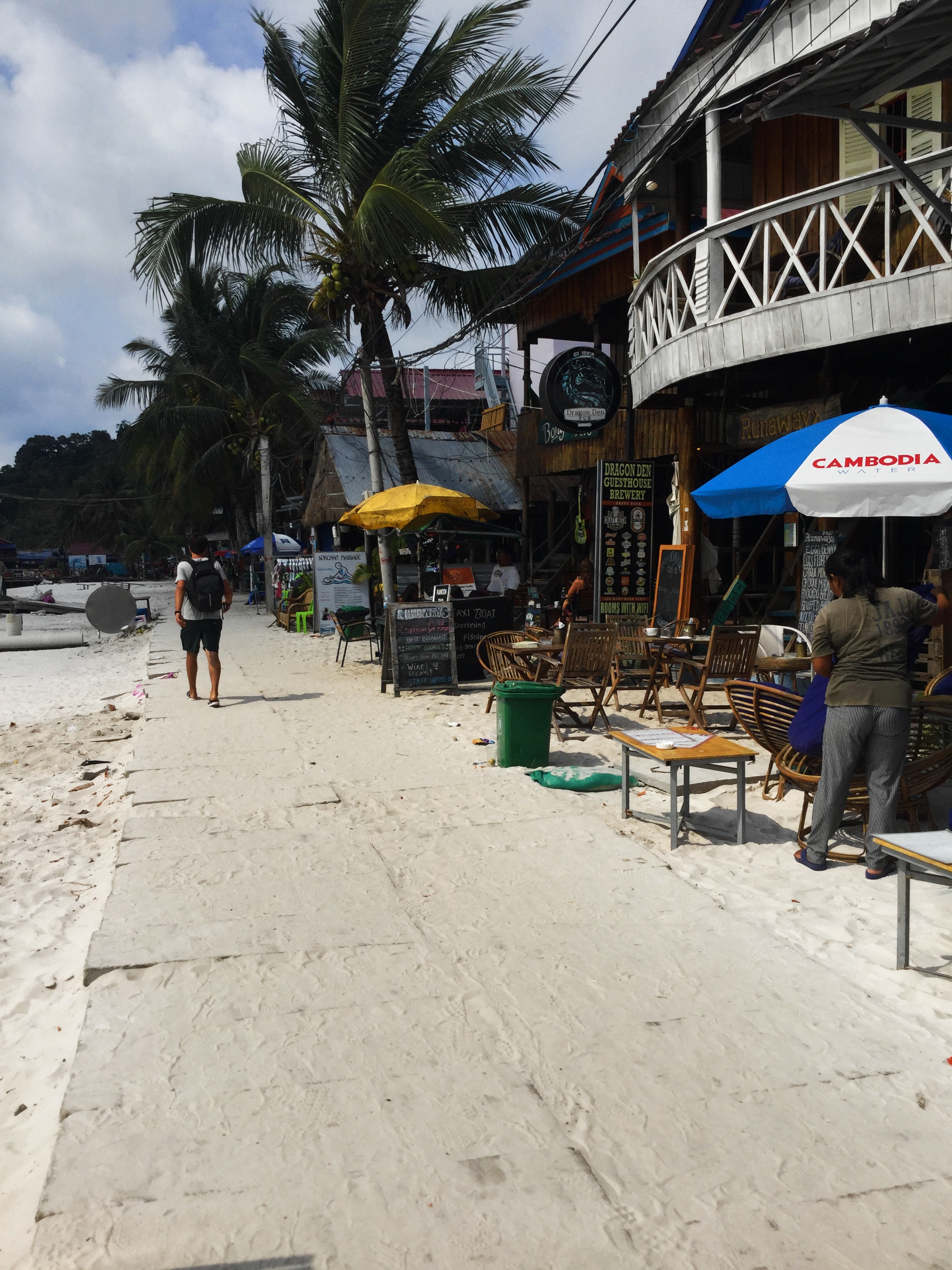 Around the island there are lots of Bioluminescence Plankton. I really wanted to see this but our only night on the island I got sick and didn’t think getting on a boat was the best idea. So although I can’t give an actual review I think that this would be a really fun thing to do and something a bit different. 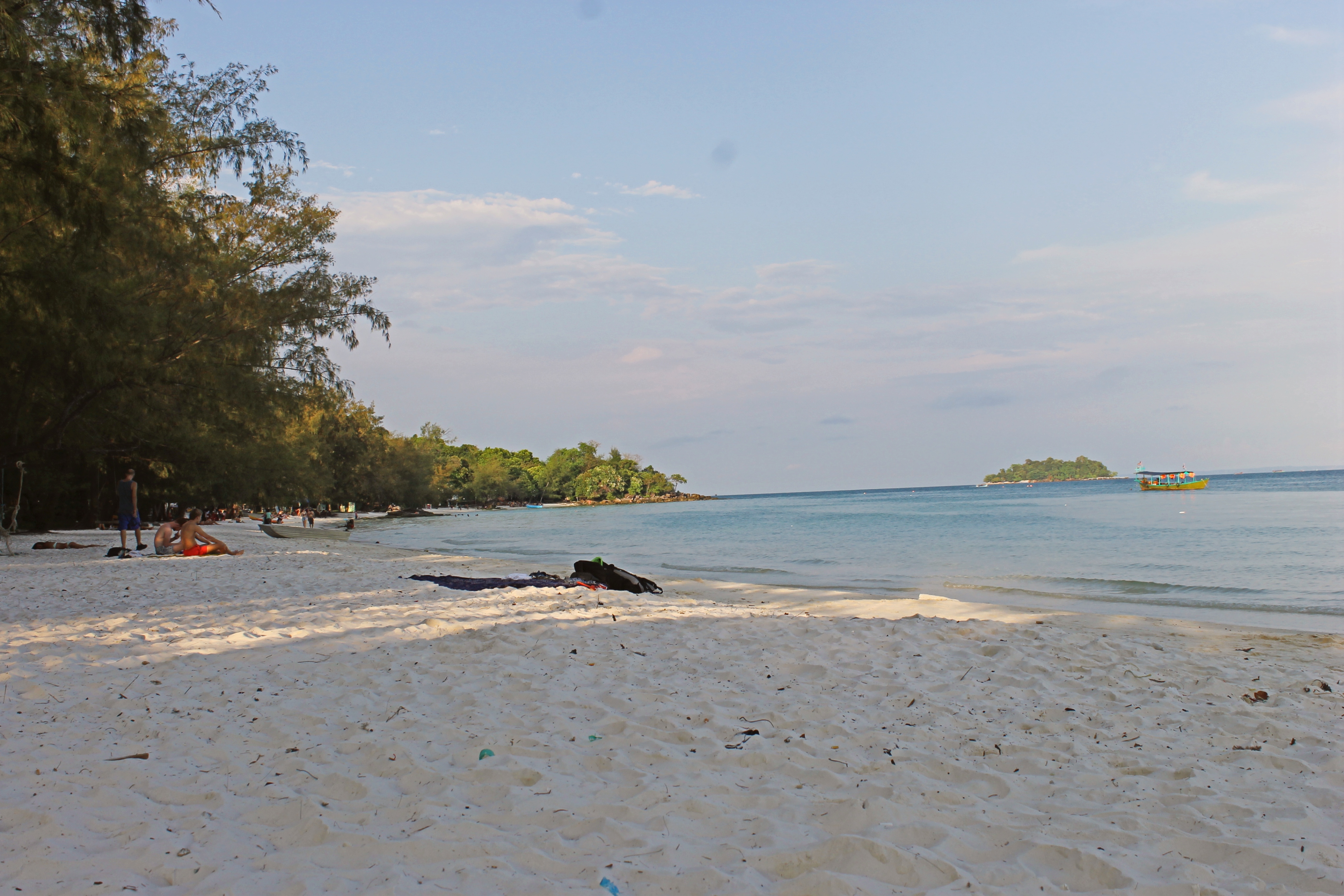 My short time on Koh Rong was actually heavenly, despite feeling sick… I honestly don’t think I’ve ever been anywhere that was quite so naturally stunning, and definitely did not expect to find it in Cambodia!

If you’re visiting Cambodia definitely don’t be put off by the lack of facilities as it’s an amazing experience and worth not having any air-con for a few nights!

Have you ever been to Koh Rong? What was your experience? I’d love to hear them!