Phong Nha wasn’t at the top of my list of places to visit in Vietnam, but it turns out that it was actually one of my favourite places! For a start, it’s absolutely beautiful and the vibe here is so much more chill than in Hanoi. I love being surrounded by nature and you can’t get much closer to it than in this tiny village. We ended up staying for two days after initially only planning for one and I’m so glad we took the extra time here.

We stayed in a place called Elegant Hostel and got a private double room with en-suite for £5 a night. This place was okay, pretty basic but fine for what we were after, although our bathroom door wouldn’t actually stay shut which was slightly annoying. But the staff were helpful even if some of their English wasn’t that good.

We came here for lunch and so only had a banh mi, but the vibe was really cool and relaxed. There is also a rooftop terrace complete with hammocks and jungle view so it’s definitely worth a visit.

The food here was absolutely delicious and so so filling! We had the fresh spring rolls to start with which were so good and actually felt like we were eating healthy as instead of rice paper they were wrapped in lettuce leaves. For my main I had a tofu curry which was also really good but I was just so full from our started that I could barely finish any of it! 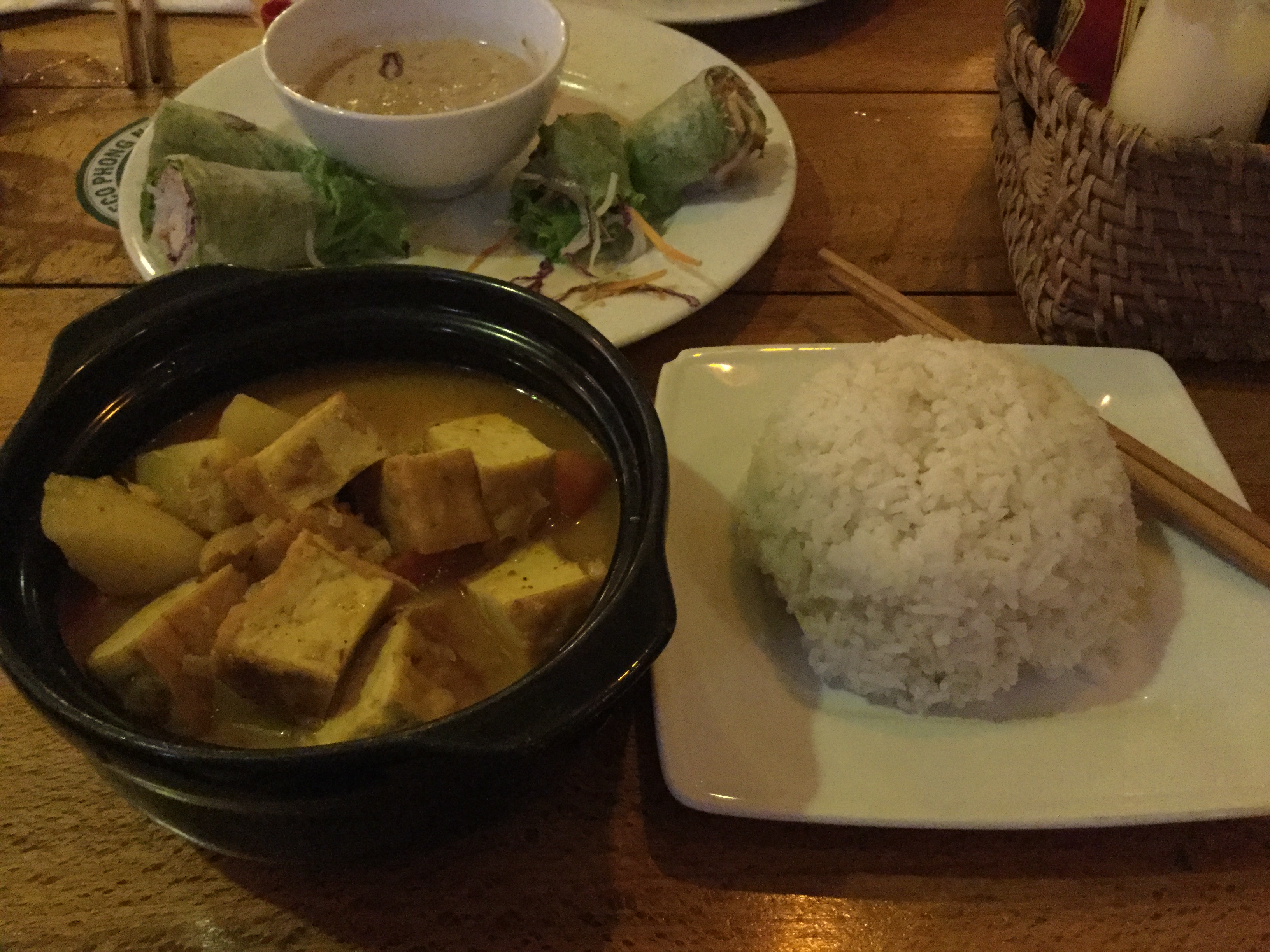 I had the veggie Bun Cha which was really good, especially the fried spring noodles. 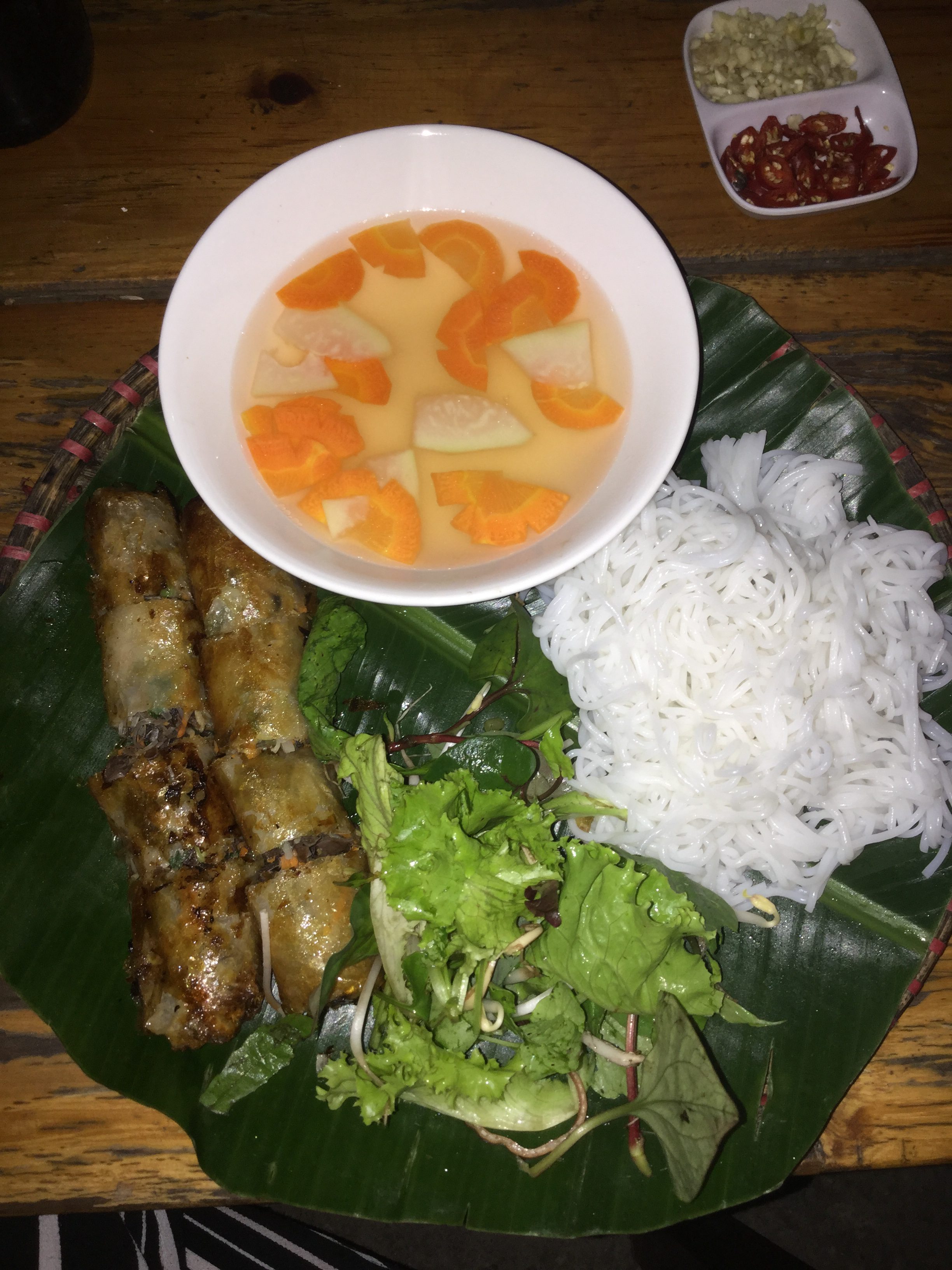 For the complete backpacker experience, go to Easy Tiger after your meal for some well earned drinks and late night snacks. Although I do like beer, I’ve always been more of a cider gal and they sold my beloved Strongbow which made my night! So classy, I know.

Easy Tiger is also one of the more popular backpacker hostels so bear it in mind if you’re looking for somewhere to stay.

Moto travel is honestly the best way to get around Phong Nha. Whether you drive yourself or get an easyrider to take you. We decided to hire one for the price of 220,000 VND for the day and it was so worth it. The drive around the national park is beautiful and it’s very hard to get lost as it’s basically just a big loop. The roads are a bit dodge in some areas but we were fine so I wouldn’t worry about it at all. Just do it! Yolo and all that. 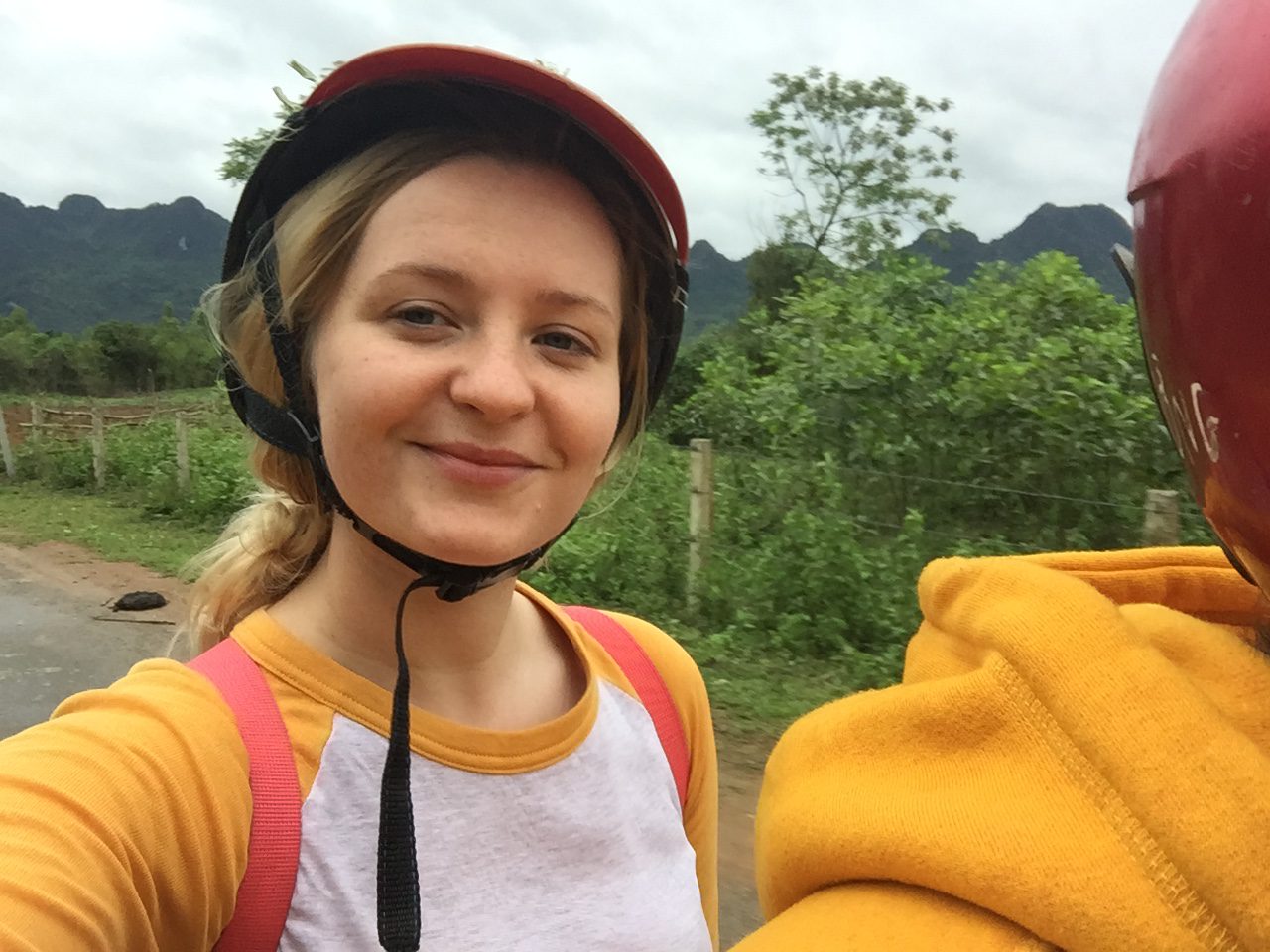 Phong Nha Ke-Bang is best known for being the home to the largest cave in the world. However, unless you’re a millionaire, you won’t be getting anywhere near that one. But, there are plenty of other caves that you visit for far more affordable prices. I chose to visit the Paradise Cave which is 250,000 to enter, although I went on International Women’s Day and so got in for 175,000! The Cave was actually really beautiful and I enjoyed walking around it. 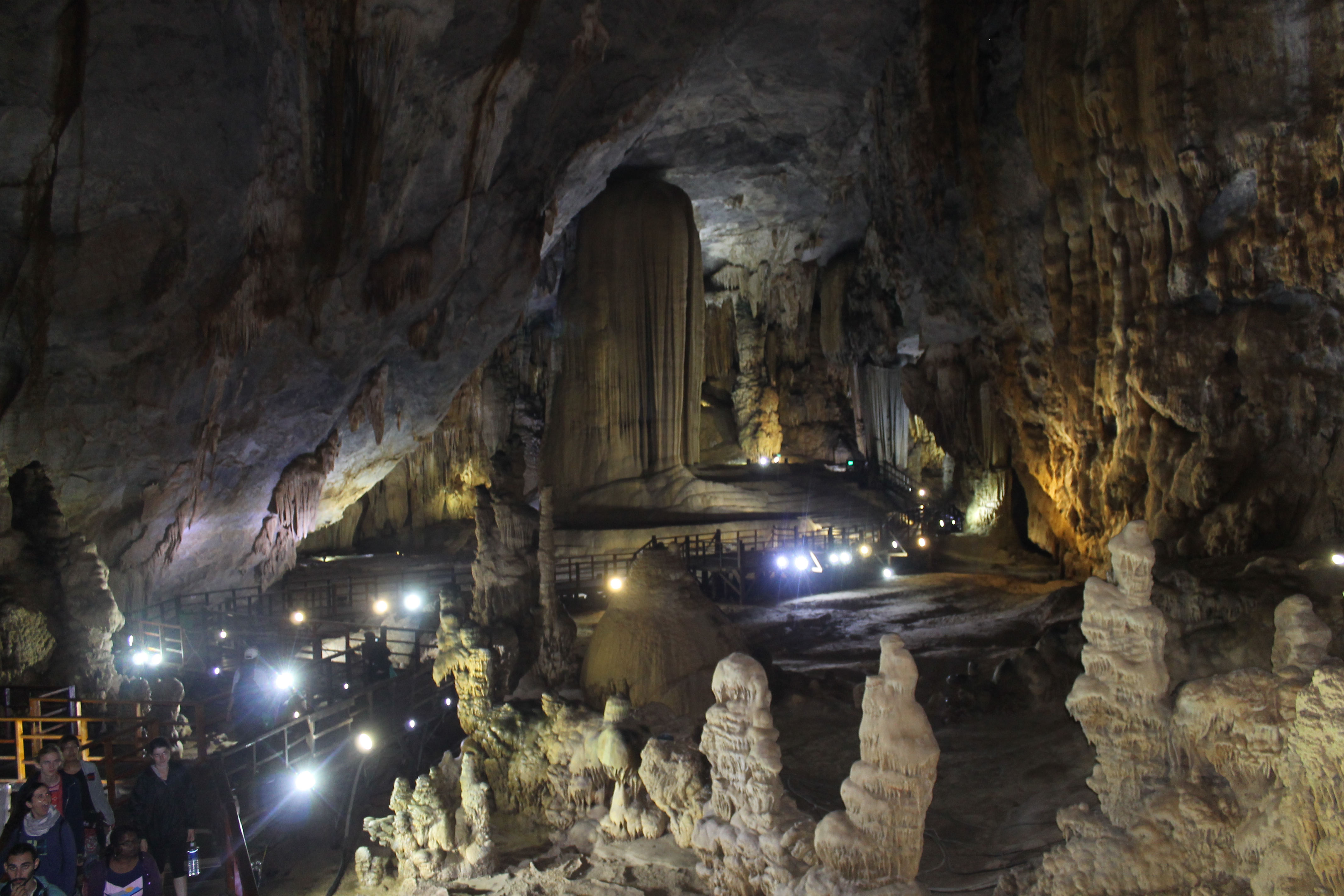 Nearer by is Phong Nha cave which includes a boat ride inside. We didn’t actually go inside by we rode up to it and it looked pretty cool. 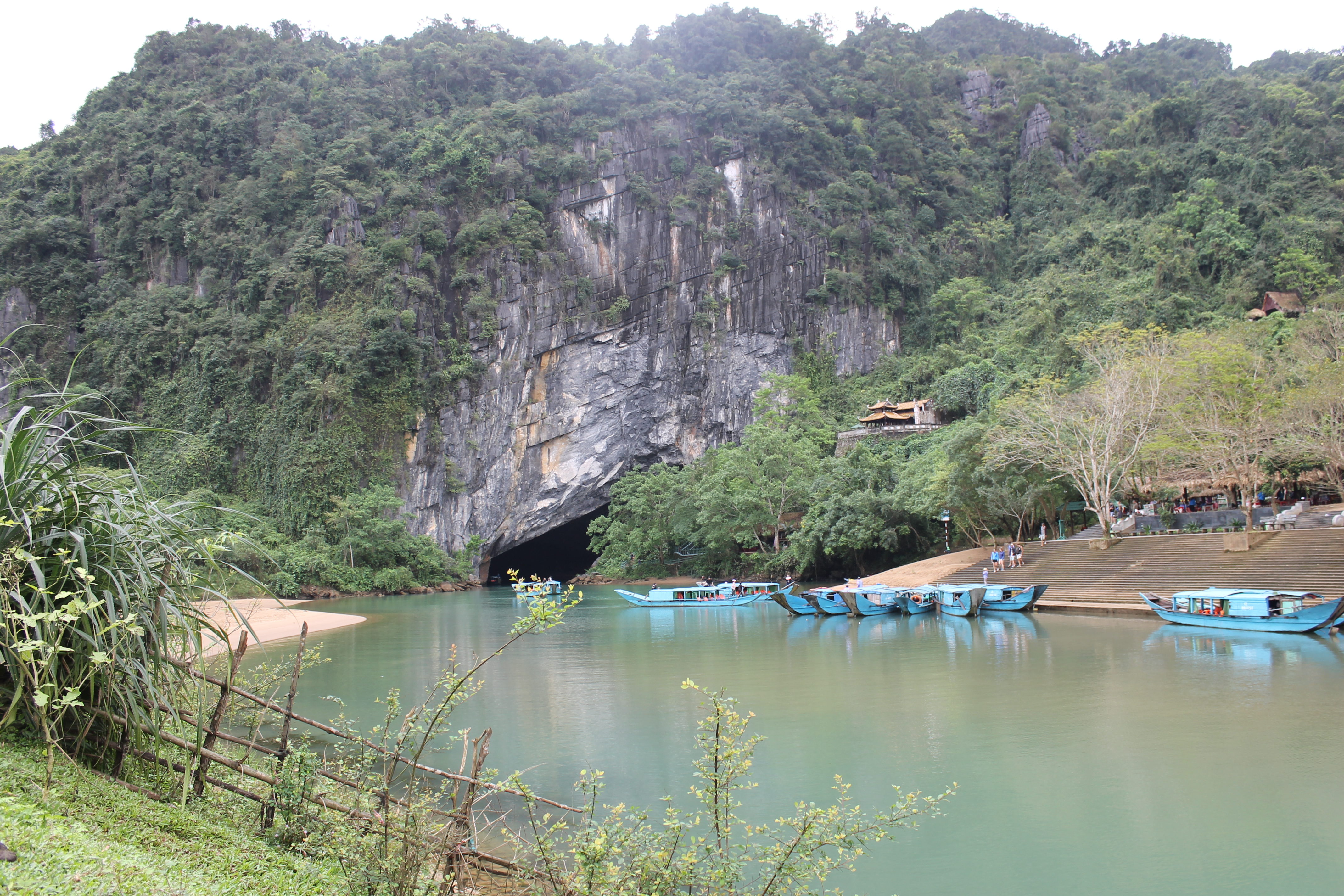 Trek through the Jungle

On our second day we went on a tour with Jungle boss and although it was a bit on the expensive side at 1,650,000 VND it was so worth the money. We decided to do the Elephant Cave and Ma-Da Valleyday tour which involved trekking 9km through the jungle and I really enjoyed it. Initially I was a bit apprehensive about forking out so much money as it was very early on in our travels but I’m so glad we did it.

We got picked up at our hotel and straight away got told to go and change our clothes! We needed long trousers with long socks in order to keep the leeches out and a long sleeved top to help protect us from the poison ivy! We had done next to no research on this tour and so it was a bit of a shock but it also made it more exciting!

From our hotel we went to the Jungle Boss office to borrow hiking boots, towels and water bottles if we needed them. Then we set off into the National park in our little 4×4.

Our first stop was the Elephant Cave. Now, I expected us to just walk into the cave, have a little look around and then leave. But no, this was proper caving. We went deep into the cave and could only see by the light of our head torches as it was pitch black. We had to scramble over rocks and even climb over this giant boulder in order to get deeper into the cave. It was actually really exciting and far more adventurous than I thought it was going to be. We did see a big spider which was kinda gross but then again I hate bugs so, unsurprising really. 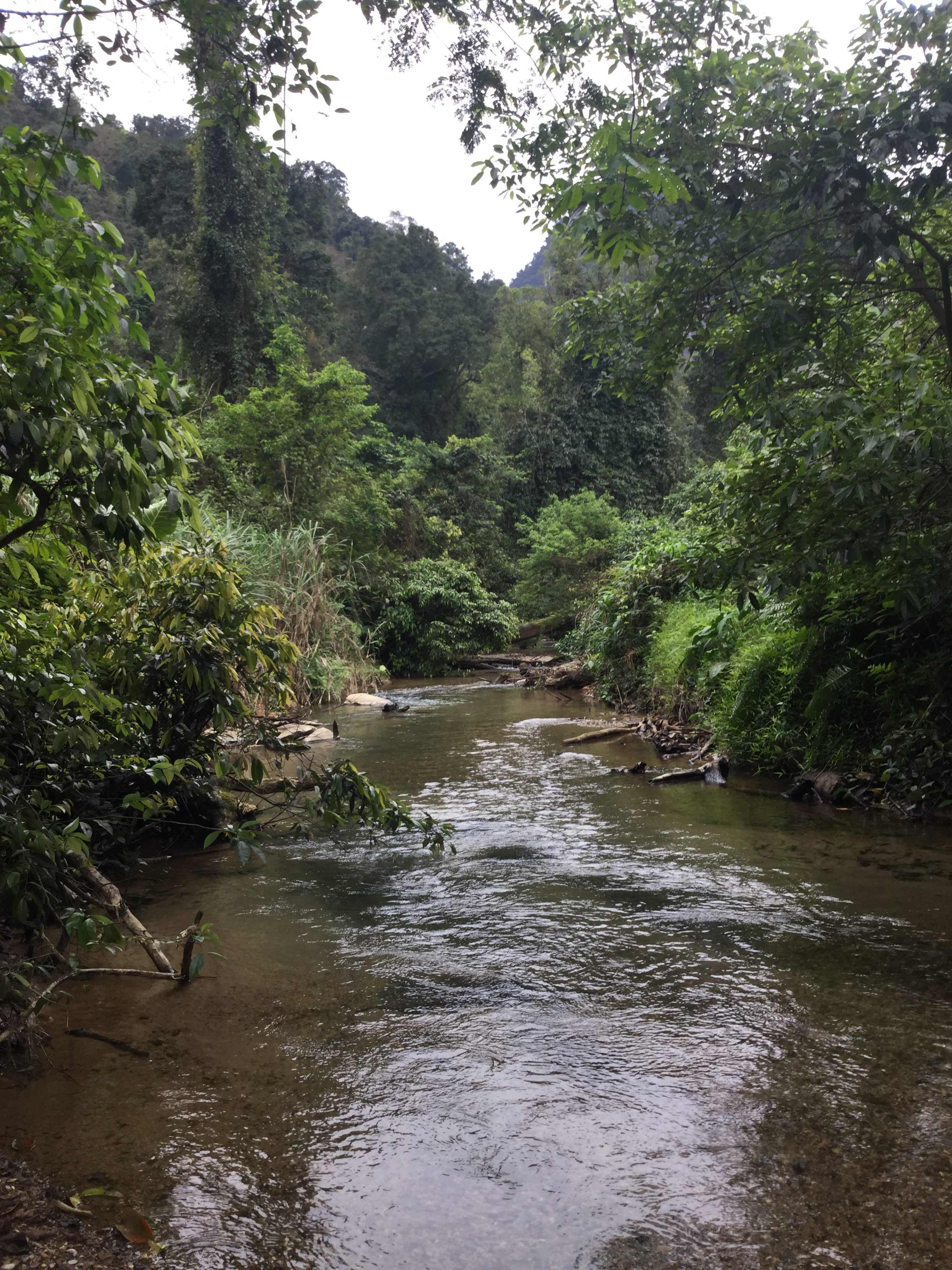 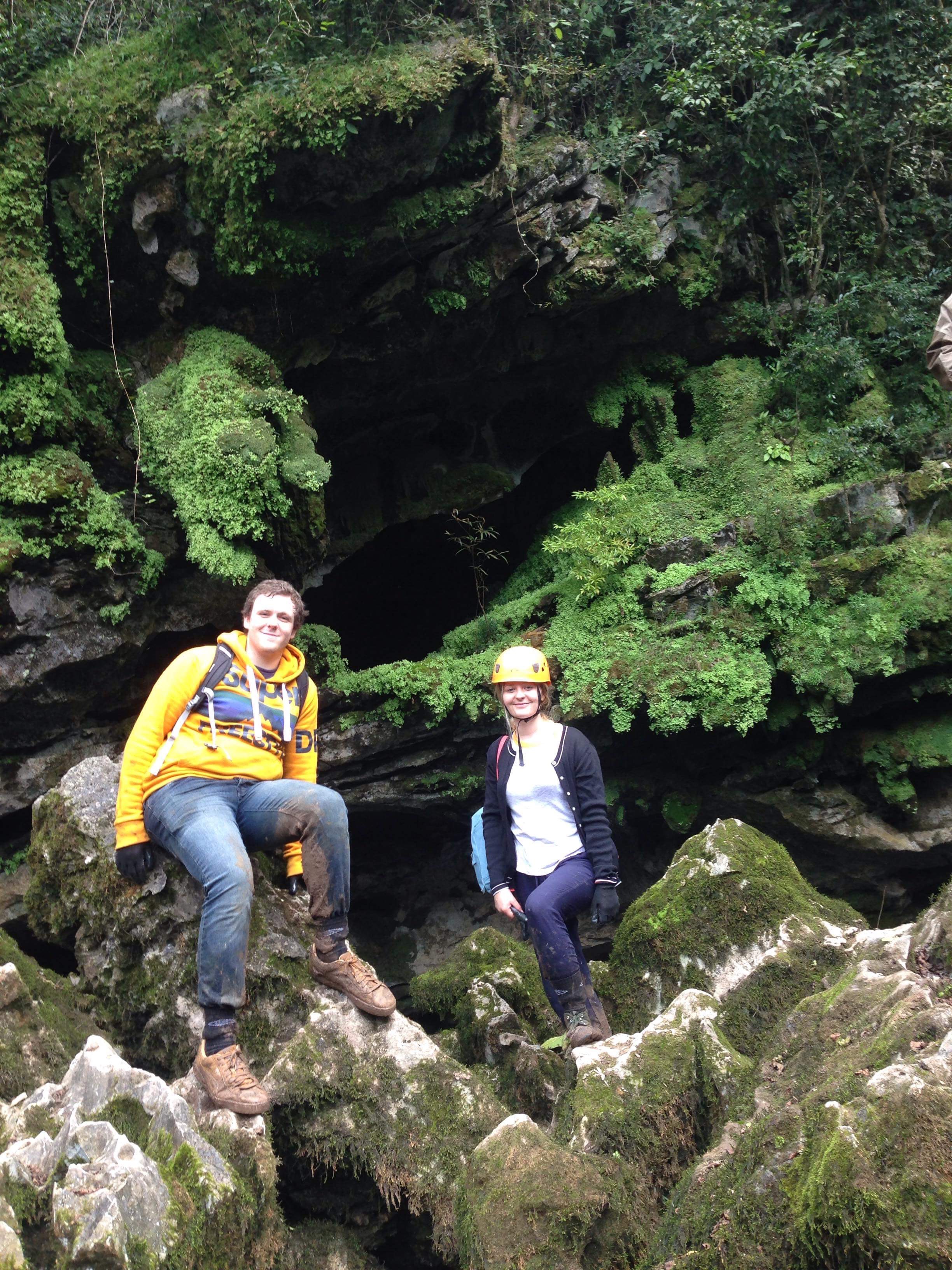 From there, we then trekked through the jungle to Ma-Da lake which was beautifully clear but freezing cold. Here we had a little swim and Marcus did a bit of cliff jumping but I was too scared! Then we sat down and ate our Jungle BBQ lunch together. 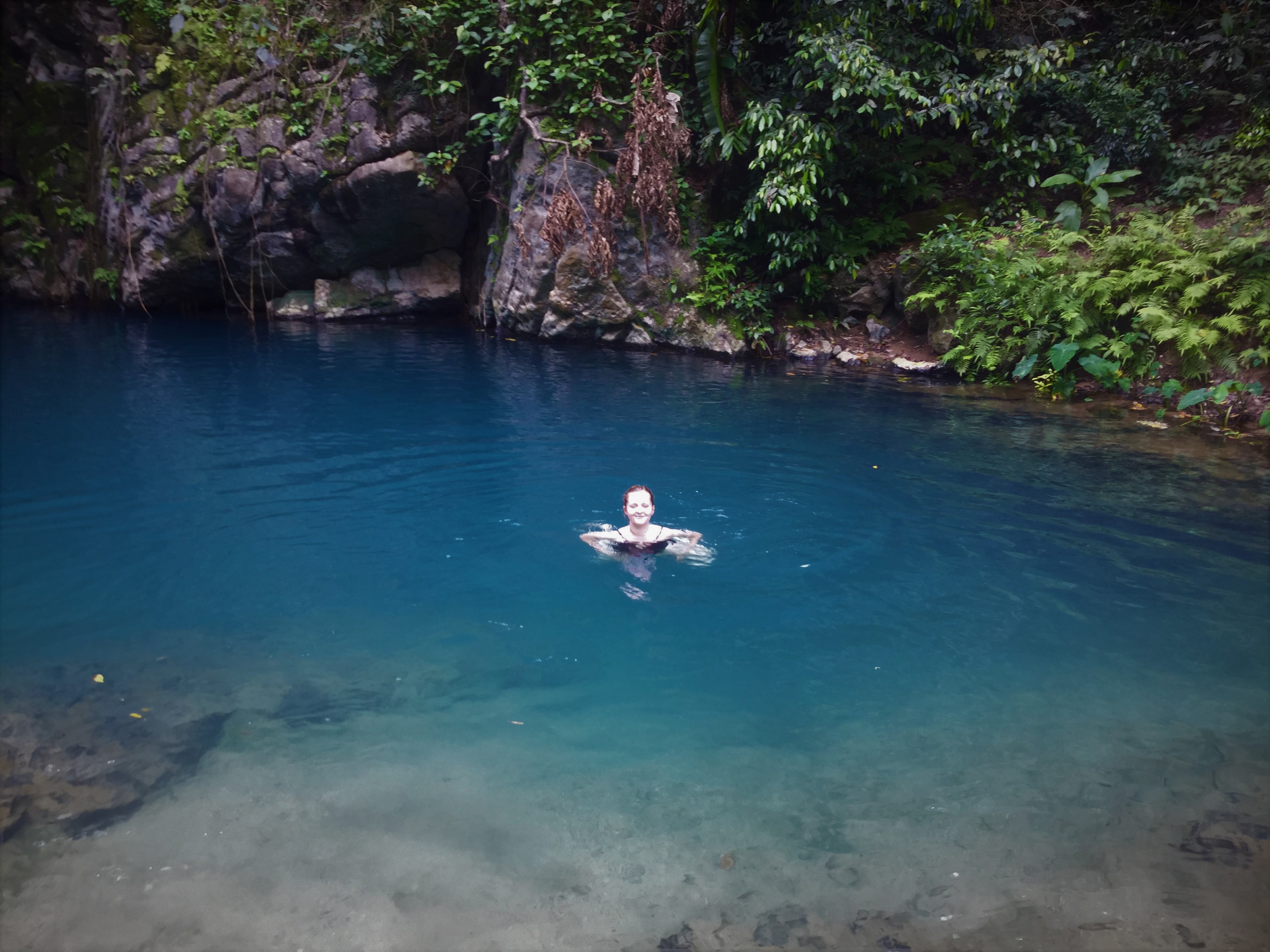 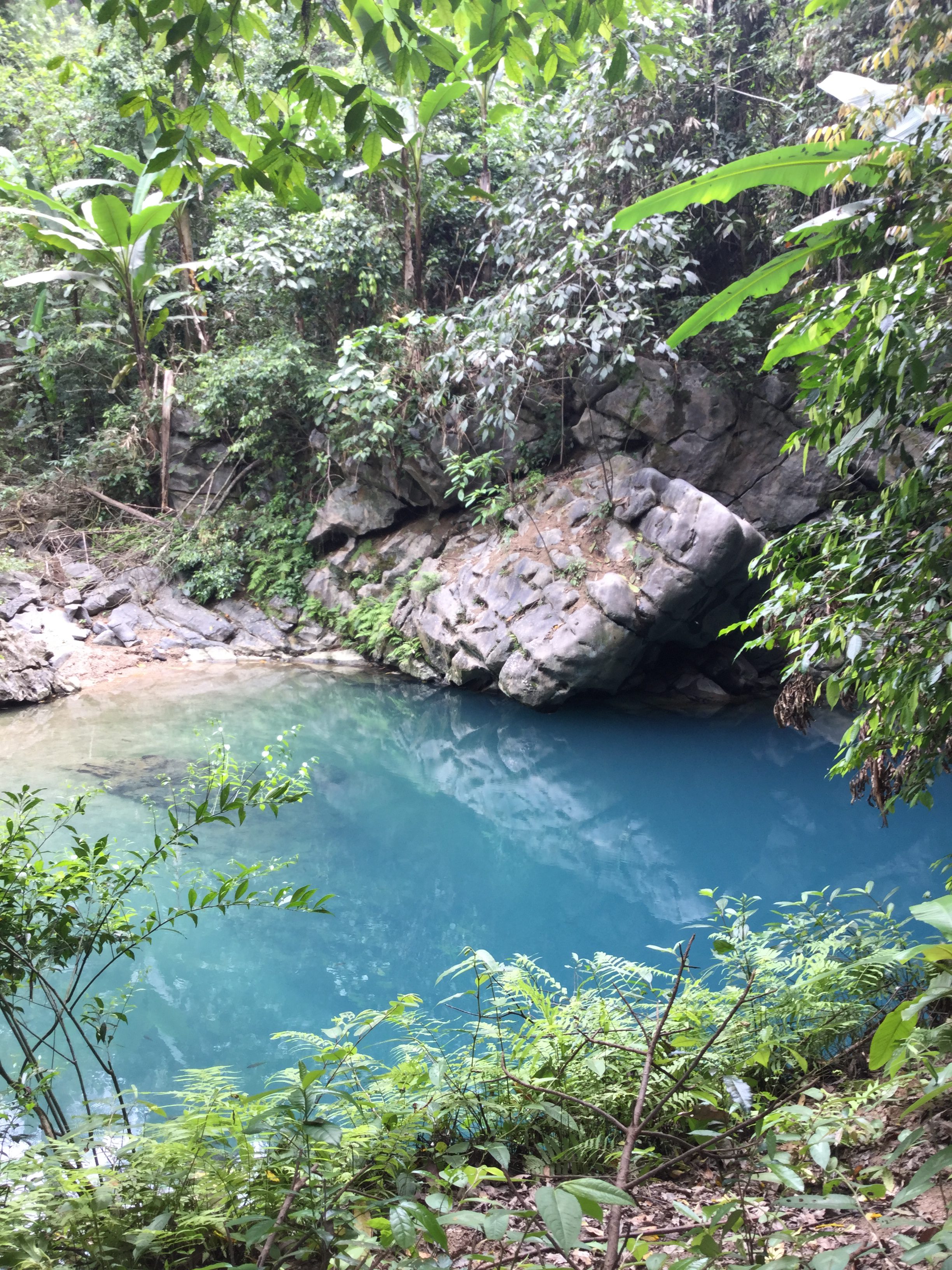 For lunch we made our own spring rolls. There was meat available for those who ate it, and for the veggies there was tofu and egg to pair with out sticky rice, salad, peanuts and dipping sauce. It was really nice and really filling and I liked that you could have as much or as little as you liked.

After we had eaten we set off to hike for another 45 minutes to reach Tra Ang Cave which we were going to swim 600m into. Once we swam inside the cave, our guide told us to switch off our head torches so we could see just how dark it was. This was kind of scary as we were just floating in the water in the pitch black, but it was also awesome. 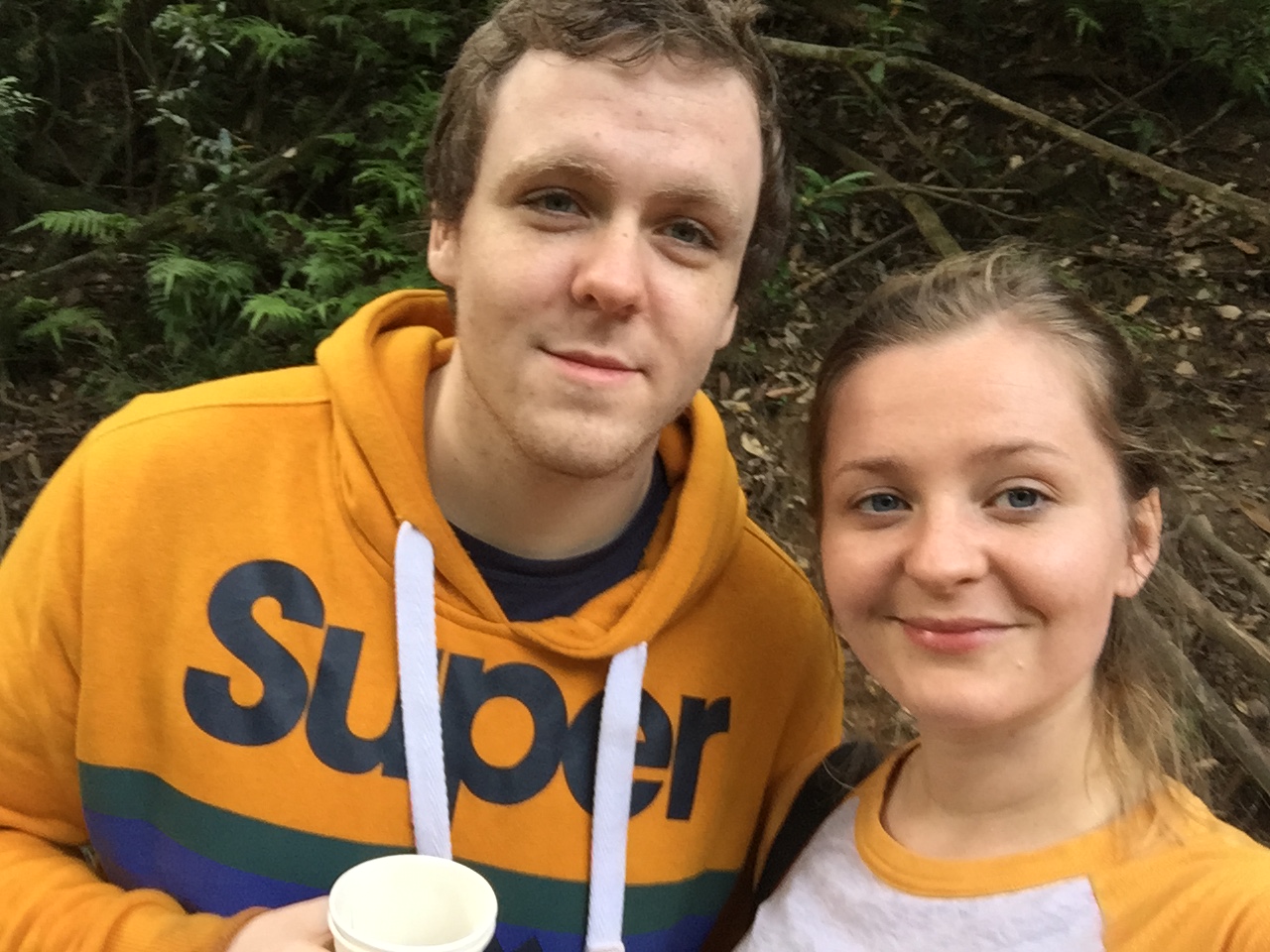 We were greeted by hot coffee after our swim which was really warming. We then got dressed again for the final 10 minute hike back to our van. Once we finished we were given a celebratory can of beer which was a lovely way to finish the day off and watch the sunset.

Even though it was a little pricey it was honestly the most fun and exciting thing and 100% worth it. If you visit Phong Nha I would highly recommend this tour as you definitely get your money’s worth! 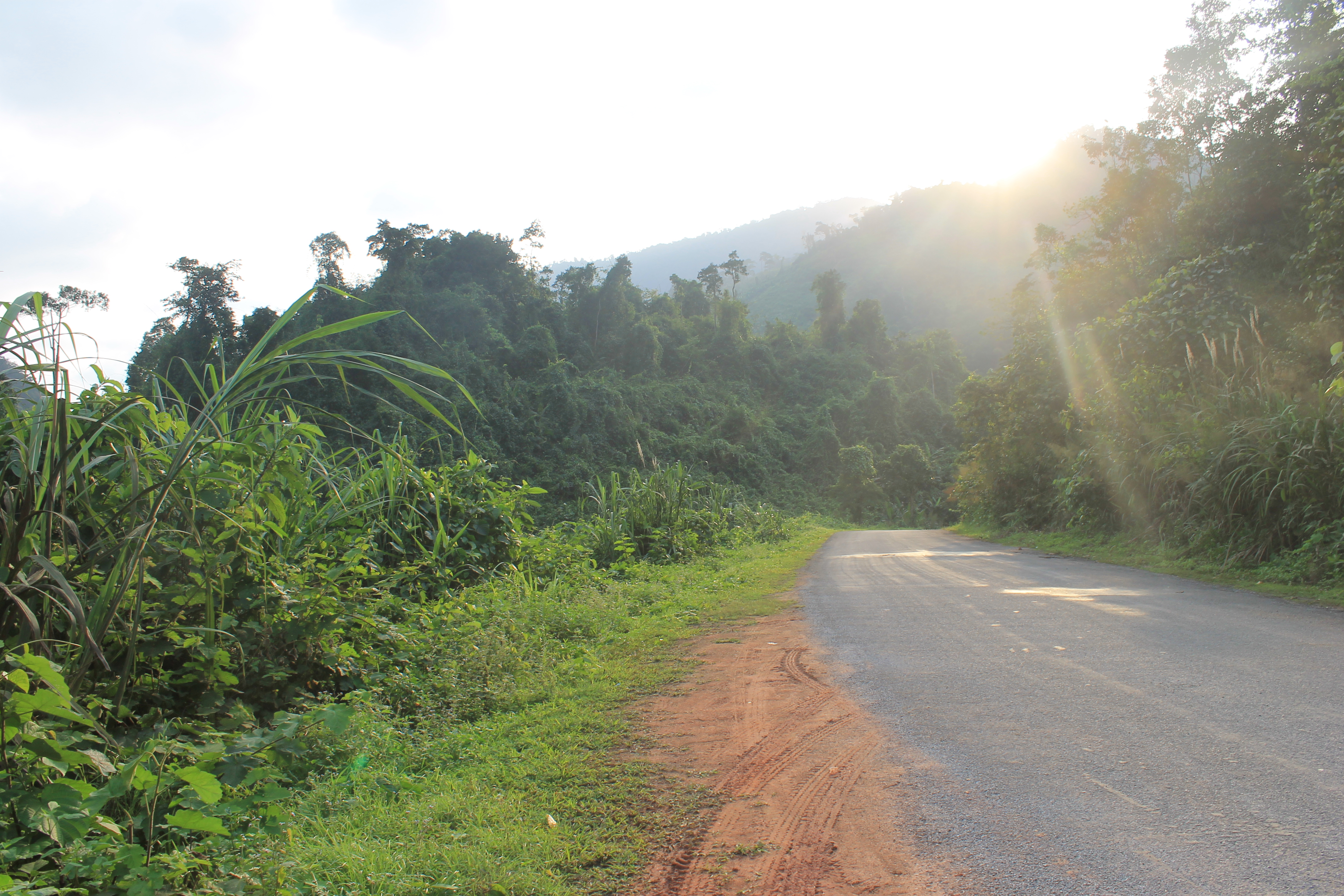 Phong Nha really was the most beautiful place and if you’re a nature lover then you absolutely HAVE to visit this little village!

Have you ever been? I’d love to hear about your experiences!