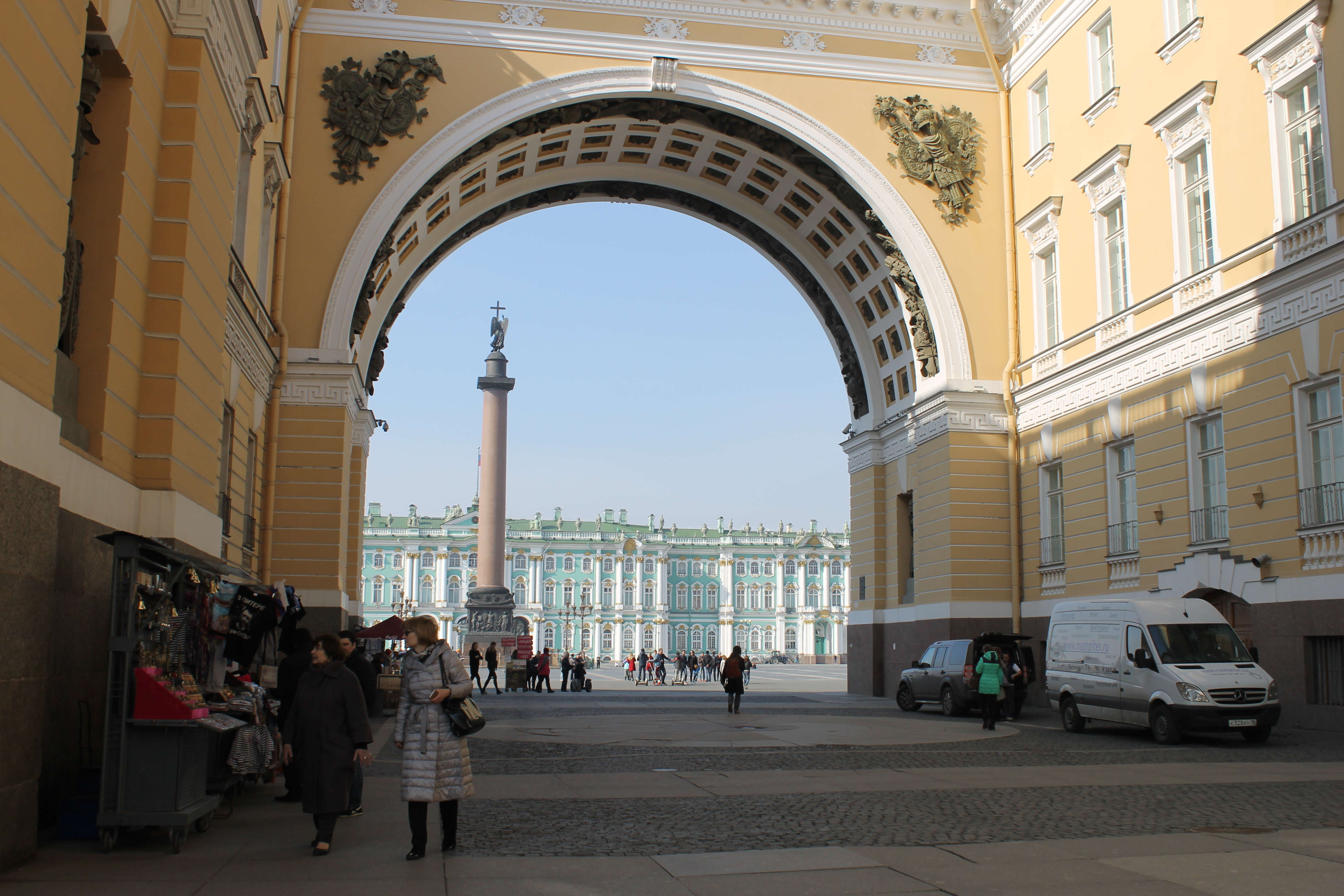 Despite what you may expect, Saint Petersburg is a truly beautiful city. I had expected to see a city full of purpose-built Soviet blocks, so was surprised to find exquisite and colourful buildings lining the streets. We arrived late at night and so had a quick dinner of (meat-free) borsch at a Tepemok, a Russian chain, before heading to the hostel to sleep.

We stayed at the Polosaty hostel, which was at the far end of Nevsky Prospekt on a road called Suvorovskiy Prospekt. The hostel had excellent facilities, was very clean and even came with a pair of slippers to make you feel at home. I’d highly recommend if if you’re planning on visiting!

We started our first full day in Saint Petersburg by marveling in the sheer size and beauty of the Winter Palace in the Palace Square. We went inside the Palace, which is home to the Hermitage Museum and spent the morning looking at the various rooms. My favourite was the white room which housed the golden peacock clock.

After, we went to visit perhaps the most famous site in the city, the Church of the Saviour on the Spilled Blood. We paid 250 rubles to enter, although if you have an ISIC card it was cheaper. It was perhaps the most colourful church I had ever seen, both inside and out. The mosaics inside were so vivid I couldn’t quite get over it. As a history geek, it was also pretty cool in a morbid sort of way to visit the spot where Tsar Alexander II was assassinated.

For lunch, we went to Zoom Cafe. When you are seated, you are given a large, plain piece of paper as a place mat and are encouraged to doodle as you wait! Genius! Whilst there, we decided to try a traditional Russian drink called Mors which is made from berries. It was very sweet but very tasty!

For dessert, we decided to go to another eatery and try another Russian delicacy, Soviet donuts or pishkis. I had mine served the traditional way with condensed milk, alongside a Soviet Coffee, which also contained condensed milk, yum!

We then spent the afternoon at the Soviet Arcade Museum. Here, you pay 350 rubles and are then given 15 tokens each to play on the arcade games!

For dinner, we went to Tokyo City, which is a chain found all over the city. I have never seen a menu as thick! It seemed to serve all kinds of cuisines and did have a few vegetarian dishes so we had a bit of a choice.

Overall, our first day in Saint Petersburg was absolutely amazing and I couldn’t wait to see what else the city had in store for us.

1 thought on “Day One in Saint Petersburg, Russia”