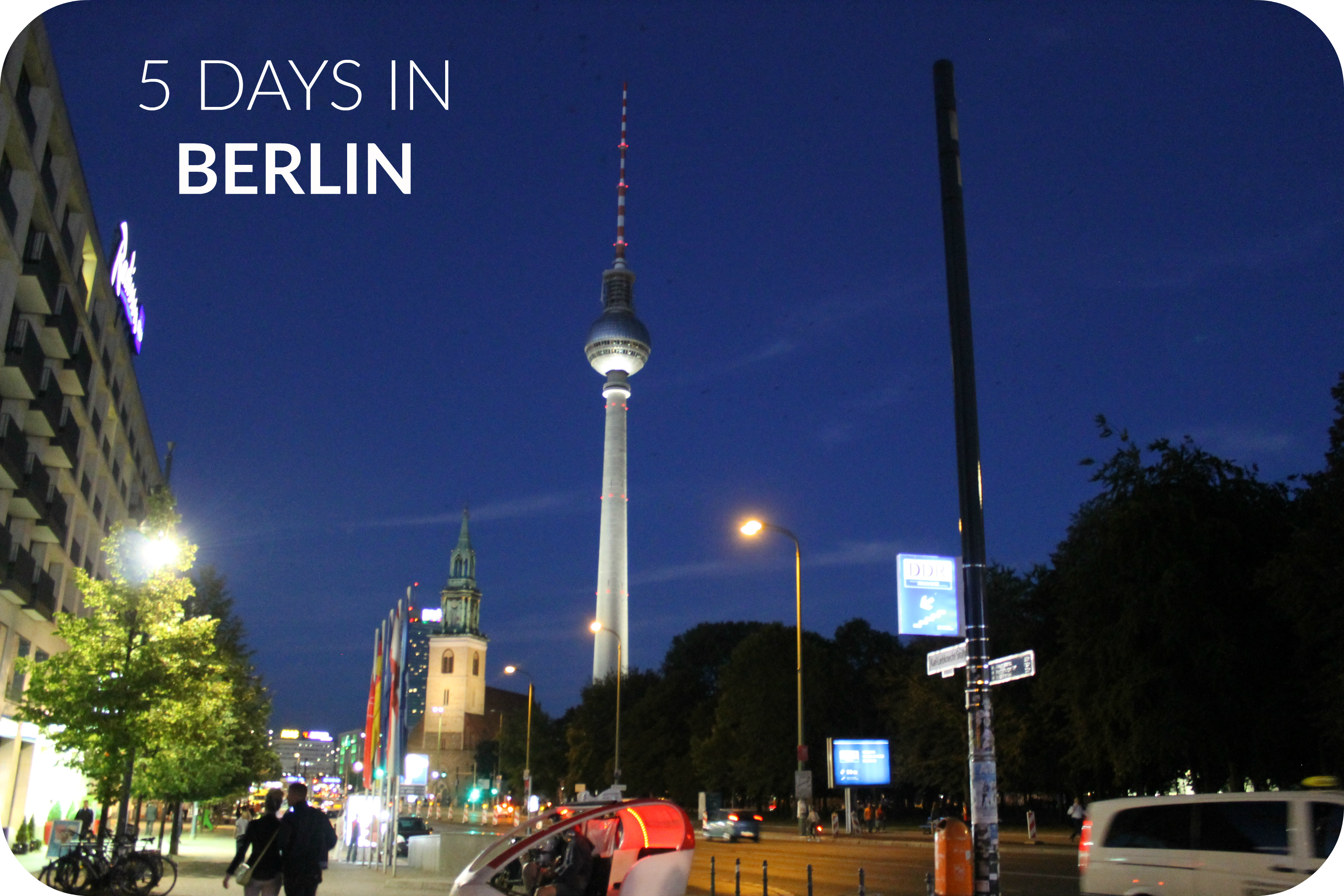 In September, my friend and I went to visit the vibrant city of Berlin for 5 days. We stayed in the Wombat City Hostel, which was about ten minutes walk away from Aexanderplatz and we thoroughly enjoyed our stay there. We ate breakfast there every day as it was only €4.50 and it was all you can eat with a good selection of continental food and cereal, hot drinks and fruit juice. And you were able to sit on the roof terrace and look out over Berlin whilst sipping your coffee, that is, if the wasps didn’t get to you first!

We arrived in Berlin on Monday around lunchtime. Once we had collected our bags, we got the train from the Berlin Schönefeld airport to Alexanderplatz which cost us around €3. From there we walked for about 15 minutes to get to our hostel.

Before arriving in Berlin, we had booked a cycle tour with Fat Tires so that we could get a feel for the city and wouldn’t waste a day travelling. I really enjoyed the tour, and for £25 it was definitely worth the money. The tour took us to all the major cites in Berlin, including Checkpoint Charlie, The Reichstag, The Holocaust Memorial to the murdered Jews and many more. We also stopped in Tiergarten for dinner and a stein of pislner. I was a bit worried about what options this would have as both me and my friend didn’t eat meat. However, i was pleasantly surprised to find that there were multiple things on the menu that we could eat, and we both opted for a veggie spag bol.

On our first full day in Berlin we got up early and set out for the Jewish Museum, which only cost us €3 with our student cards (standard price is 8). I was thoroughly interested in the first section of the museum, which focused on the holocaust, and thought it the display was both though provoking and a good way to represent the horrors that it entailed. The other section of the museum gave a thorough history of Jews throughout time. Although this was very interesting, there was a lot of information to take in and we were both tired from our overnight travel the day before.

After, we walked towards Potsdamer Platz to grab some lunch. We opted for a falafel wrap as it was cheap and fast. Due to the large Turkish population in Berlin it is pretty easy to get a falafel wrap, or a kebab if you eat meat, and I happen to love falafel, so this was a good shout.

In the afternoon we walked around the Topography of Terror, which is free to look around. As part of the exhibition, there is a length of information which runs parallel to a section of the Berlin wall. Although the atrocities that this museum explains are hard to learn about, it is a very frank lesson in this time in German history.

For dinner, we went to Cha Cha, a Thai restaurant on Friedrichstraße, which was both fairly priced and super yummy!

We started the day off by visiting the Berlin bunker story, which was located near the Topography of Terror. On our walk there, we found some of the golden tiles that are located outside houses of those who were killed during the war. They give the name, when they were born, what happened to them. If you visit Berlin you should definitely look out for them, they are harder to find then you would think, or at least I didn’t seem to notice them.

The story bunker consists of three levels: the museum, a torture floor and a scare floor. I am the first to admit that I am a massive wuss, but my friend really wanted to look around the torture rooms. In theory, I am not bothered about learning about gory things and find it in the most part interesting. However, this area of the museum was pitch black with spooky noises and cheap scares, and safe to say I did not enjoy it. At all. However I did really enjoy the museum on the bottom floor and for the museum alone it was a bit cheaper, so i would definitely recommend that.

For lunch we decided to try a German delicacy, currywurst. We found a place near the topography of terror called ‘curry in the wall’ which also served vegetarian/vegan currywurst, and for €8 we also also got some chips and a drink. I was really excited to try currywurst, but i have to say i was a little disappointed and not something I would have again. Perhaps the meat version is better, but I am glad i got to try it.

In the afternoon we visited the east side gallery. I was really excited to see this, and was not disappointed, although the metal barriers that were put up to ward off other graffiti artists were a little obtrusive.

For dinner, we went to a burger joint near our hostel called Shiso Burger. It was really busy when we went but we were able to sit down. We both opted for the veggie burger with sweet potato fries, and it was amazing.

After dinner we decided to go for a drink, and so firstly stopped in one of the places near Hackescher Markt for a cocktail and listened to one of the musicians. After, we walked back towards our hostel and stopped in one of the places nearby for a glass of wine before bed. Near the wombat hostel there are a number of eating and drinking places within a few minute walk and so this was an added bonus of our location.

Our next stop in Berlin was to look around museum island. For €8 we bought a day pass which gave us entry into all 5 museums. We went into the Neues museum, Altes Mueum and the National gallery. All three contained very interesting artifacts, one of my particular favourites was the Bust of Nefertiti in the Neues Museum.

For lunch we stumbled across a market in  Hackescher Markt and bought a Vegan box from one of the stalls there, which for  €5 was satisfactory.

In the evening, we went to Clarchens Ballhaus. We first ate (pizza and wine, classic) then went inside to have a look around. It really was like going back in time and I wish that people still danced like that in clubs now as it was so cool!

After, we went and took pictures in one of the old fashioned photo automats that are dotted around the city, as a momento of our holiday. For only €2 this was an absolute bargain, and so cheap compared to what photo booths cost in the UK.

After, we went to find Fassbender and Rausch to buy some chocolate, and then had a wander over to Gendarmenmarkt. We went inside the German church as this had an exhibition in it stayed there for a while. When we came out, we stumbled across a traditional German orchestra of sorts performing on the steps of the Konzerthaus. We couldn’t quite work out why they were there, but it was lovely listening to them play.

Our last stop was a visit to the cathedral. When i first found out it was €5 I was unwilling to pay it as it seemed quite steep to look inside a church, but as we found out it was well worth the money. Including in that price was a look around the main area of the cathedral, a small exhibition, an entrance to the top of the dome so you could look out over the whole of Berlin, and entrance to the crypt. I would thoroughly recommend going inside as it really is a beautiful building and the view from the top of the dome is exquisite.

Over these 5 days, my friend and I fell in love with Berlin and I would love to go back again and do the things that we didn’t manage to pack in! A lot of people told me that Berlin is quite an expensive city, but we managed to do everything we wanted on the cheap so if money is putting you off then I would say that it is definitely able to do on a budget. If you like history, then going to Berlin is a must!