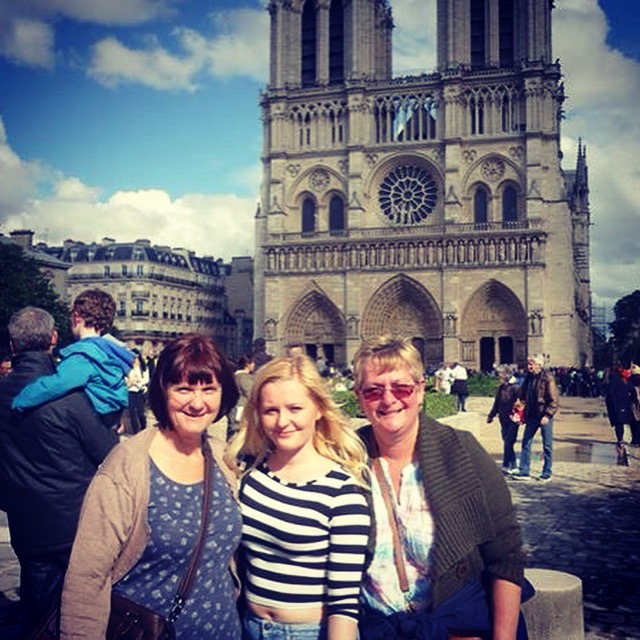 For my cousin-in-laws hen party, 13 other women and I went on a weekend away to Paris. We travelled by mini-bus through the Channel Tunnel, and drove all the way to the city of love. For our weekend away we stayed in a wonderful apartment in the 9th arrondisement, on the Rue d’Amsterdam, which is within a ten minutes walk to the Moulin Rouge.

We arrived in Paris at around 12.00 local time and as we had been travelling since the early hours we went looking for a bite to eat and came across Le Petit Poucet, a charming little restaurant that had a wide range of eats. Being a vegetarian, I had the veggie burger which was absolutely amazing. I never thought one of the best burgers i’ve ever eaten would be on a chance visit to a restaurant in Paris!

After we had satisfied our hunger, we then went on a river cruise on the seine in order to take in the sights of Paris. On this cruise we had a headset which told us about the history of the monuments we were passing.

We then went to the iconic Eiffel Tower, and traveled all the way to the top, which i’ve got to say was a little scary. Unfortunately, the whether was not the greatest and it did rain, but the views from the top of the tower were breathtaking and you were able to see the whole of the city despite the clouds.

On the second day , we went out for a traditional French breakfast of croissants and coffee before heading off to the Catacombs. The catacombs are underground ossuaries and hold the remains of about six million people. They were really quite eerie but very interesting, and again came with a headset so the history of the Catacombs can be known.

From the catacombs, we then walked to the Cathedral de Notre Dame on the Seine, taking a pit stop in a cafe for some well earned Crepes. Once we had taken some pictures at Notre Dame, we’ll then went to the Pont Des Arts Bridge, so that the bride to be could attach a padlock to it and throw the key into the Seine. How romantic!

Finally, as a celebration of the final night we went for a meal at La Mandigotte, a restaurant near our apartment. The meal was absolutely exquisite. I know i’ve had a lot to say about all of the food in Paris but this meal really was sublime. For my starter I had French Onion Soup with a cheesy crouton which was delicious. For my main, the menu did not really have anything vegetarian that really appealed to me, but when I asked the waiter he said that they would be able to make up a veggie platter for me. I did not really know what to expect but when it came it was delicious. It was a plate with lots of different little dishes made up of ratatouille, white rice, salad, potatoes and a toasted baguette with goats cheese and roasted baby tomatoes. For desert I had a chocolate brownie with vanilla ice cream.

On our slightly inebriated trip back to our apartment, we took a whistle stop tour to the Moulin Rouge to take some picture before going home to sleep.

Overall, I had a very short but sweet weekend in Paris and thoroughly enjoyed it, especially the food if you couldn’t tell! I would love to go back again and explore much more of the beautiful city.